Two of Canada’s most celebrated and prolific architects, Douglas Cardinal and Etienne Gaboury, are often recognized as being Métis, yet despite varying degrees of documentation regarding their individual careers and biographies, there has been minimal discussion about what it might mean to be a Métis architect. Significant academic attention has been directed towards Métis culture and history in recent decades in various disciplines, most notably since the Canadian government first formally recognized the Métis as one of the country’s aboriginal peoples in 1982. Architectural research, however, has been almost exclusively within the realm of archeology and historic preservation, framing it as a historical phenomenon tied to a specific time period. This research project considers Métis architecture from a diachronic and design-based perspective that will contribute not only to understanding evolving Métis culture and identity, but also provide a unique contribution to Canadian architectural history and contemporary design topics. It will also provide a historical and theoretical framework for the education and training of Métis architects in Canada.

The research will build upon David Burley et. al’s (1988, 1989, 1992) archeological research undertaken during the 1980s into prairie Métis settlements, where distinct approaches to design were observed and documented (see this web article by Graham Chandler about the vernacular Métis homes observed by Burley in Saskatchewan). Métis culture has always been one of mediation between two sets of worldviews and values, each with its own formal system and sets of traditions developed over centuries, leading eventually to the mutual exclusion of the Métis people. The result of this unique cultural event in Canadian history was a new way of life akin to both dominant groups of colonial Canada yet distinct from them, and out of this, as Burley et al’s research indicates, three unique approaches to design emerged: 1) a distinct responsiveness to the landscape, 2) an emphasis on egalitarian space, and 3) an informal approach to design. All three of these design strategies are worthy of further study, yet Métis informality will be given emphasis in this project as it seemingly supports the development of the other two. Informal approaches to design have historically been treated as insignificant due to their lack of adherence to recognizable rules or ‘styles’, along with their ‘vernacular’ and thus ‘nonprofessional’ approaches. However, significant texts have argued for the immense value of informality in terms of its flexibility, adaptability, and imprintability, all of which seemingly contribute to historic and contemporary Métis architectural design. Current scholarly discourse regarding formal and informal systems in urban and architectural design theory, as well as vernacular and material traditions, will focus on a better understanding of Métis design thinking, rather than initiating a search for an architectural ‘style’ that would inevitably negate the rich complexities and variations within the topic. Drawing upon architectural texts on vernacular design and informality, as well as postcolonial theories of material culture by authours such as Henry Glassie (1999, 2000), this research project will offer an original contribution to Canadian architectural discourse by addressing the syncretic nature of our cultural and built environment through a better understanding of one of Canada’s unique aboriginal cultures. 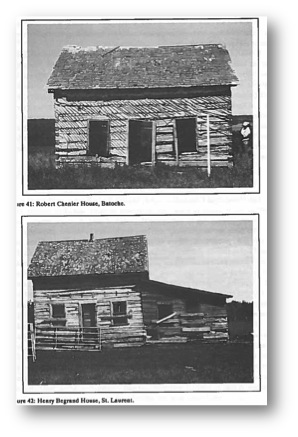