Map showing the Elizabeth Métis Settlement and its proximity to Cold Lake.

(Click here for the “Introduction to the Alberta Métis Settlements“)

Elizabeth Métis Settlement lies approximately 32km south of Cold Lake, Alberta, and has a population of around 650 people with a land base of approximately 25,000 hectares. The above map indicates the current zoning of the settlement and offers a quick sense of the scale of the Alberta settlements. Although there are approximately 20-25 households within walking distance of the community centre (which includes the administration building, an Aboriginal head start program building, and each of a school, church, and community centre, as well as a few others), the remaining residences are spread throughout the settlement territory. This is an essential first observation of the Alberta settlements as the geographical distance between community members is often vast.

Driving through Elizabeth with Rick Blyan, Director of Public Works, clearly demonstrated that the sense of community here, however, is strong, like many rural communities with significant physical distances between neighbours. As an Elizabeth elder described during an interview, “We all live a mile away from our neighbour.” (1) This is not surprising given that the 1938 Métis Population Betterment Act sought to establish a land base for the then-struggling Métis to continue their traditional way of living off the land as their priority. Hunting and fishing continue to be essential aspects of life for the Elizabeth community and their acreage-based lifestyle is an ongoing reminder of the political triumphs of the settlement forefathers (still revered and visible today within the settlement communities). The relationship between the people and land was, and continues to be, a central priority and shared value. 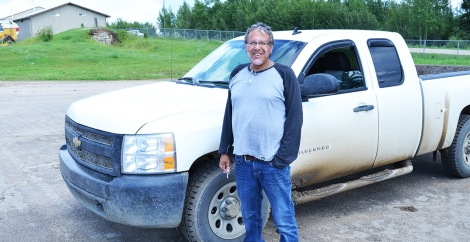 Within the settlement there has been significant building activity during the past 30 years as various programs were established for housing and upgrading community facilities. As with the other settlements visited, government-led housing initiatives have aspired to offer better living conditions for the community members. A combination of pre-designed housing packages from companies like Nelson Lumber (based in Llyodminster, AB) and Cold Lake Building Supply, mobile homes as part of a government-led program pre-1990, and, most recently, a street of Habitat for Humanity-designed homes, has largely introduced typical residential building typologies from neighbouring communities.

The pace of building, however, has decreased as government funding has shifted in recent years. Blyan notes that the community has gone from 15 houses per year in the years following the Alberta-Métis Settlements Accord in 1989, down to 3 recently. During the building years, the Accord dictated the budget for the houses with some variation through a catalogue-like process allowing for a few resident choices (choice of 2-3 house prototypes, some interior finishes, etc.). As elder Archie Collins describes, there was not a lot of input perceived by the owners themselves. “You get a home. You get a package. You get a dollar amount that you are going to spend on that home and the building codes dictate…how that building is built and what kind of insulation, what kind of vapour barrier…vents and everything.” (2) Design considerations related to building orientation, for example, have never existed on the settlement as far as Collins could remember. Another elder summarizes the relationship between resident and home succinctly by noting, “When you’re told you have to build your house closer to the power and the gas lines, you have no choice…You might change a closet, you know…Somebody makes the decisions…my door is to the north – that’s where the wind comes from.” (3) Thus, while her point is made with a smile, there is a clear implication that, despite the upgrading of homes to meet Alberta Building Code standards during this process, straightforward considerations like the relationship between house and landscape were not adequately taken into account.

In this way, at first glance, the “architecture” of Elizabeth appears to be one of cultural transference from the non-Aboriginal world surrounding the settlement, something the elders see in the community at many levels. For both of the elders, the Métis sash, the moose hunting, and the fiddle music, for instance, embody their Métis heritage. However, maintaining the Métis culture also has its challenges in a world where technology and education have opened up the Métis youth to the world as much as anywhere else. For Collins, part of the issue is with the education structure and that “white society decides the curriculum and…what’s going to be taught to your children,” a situation he feels needs to change in order to maintain the Métis traditions. (4) Michif was spoken in both of their homes growing up, for instance, but as the older generations have passed, so largely has the language despite some efforts to introduce it into the school’s curriculum.

And yet, there is indeed architectural relevance behind the veil of an imposed (and presumably inevitable) universality in Elizabeth settlement. While perhaps not specifically unique to Elizabeth settlement per se, there is definitely a hint of local building traditions here. For instance, the community sod-roofed cellar, first used in 1952, uses minimal joinery and dried black poplar timbers to create a sustainable model for the integration of landscape and building. 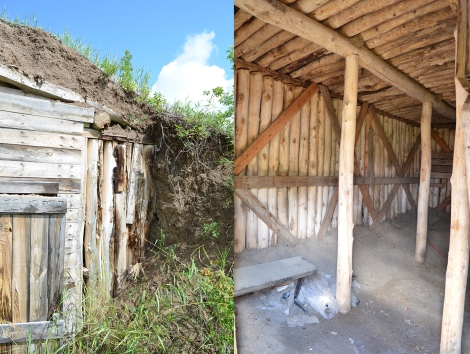 The “cribbed” construction of the barn is not foreign to the prairie landscape; timber grain elevators, for instance, were constructed in a similar fashion throughout rural USA where the robust construction was deemed appropriate due to the lateral forces of the weight of the grain. Timber cribbing is still used for retaining walls but only very rarely seen as a viable building alternative due to the increased amount of material and cost (as opposed to framing the structure with standard lumber and using sheathing). More research will need to be done to trace the possible origins of this at Elizabeth.

The gable-roofed shack on the left is designed for smoking fish and includes open clerestory venting and a fabric door to contain the smoke but also allow it to exit. The structure on the right is for the drying of moose meat. In both cases, there is a clear relationship between material, technique and form, that indicates a distinct design process using local material, traditional knowledge and playful adaptation.

And yet, while these examples offer a rich introductory discussion surrounding early Métis building techniques and their contemporary interpretations, there is also another side of Métis culture worth mentioning at Elizabeth with regards to buildings and design. Though alien to the Albertan landscape, there is a recently built concrete-domed house and garage where Elizabeth Evans and her family live. Here, the sustainable aspirations by the owners led them to pursue a Texas-based company to embrace a universally-promoted technology that is both energy efficient and relatively cost effective.

Similar to the earlier catalogue-home experiences described by the elders, expertise from outside of the settlement here offers solutions that unashamedly break from any traditional methods (though it could be easily argued the emphasis of the circle is reintroduced through this technology). Evans even proposed to the council that the dome houses made enough ecological sense that it would be useful to consider implementing them across the settlement – a proposal not embraced by council members at the time.(5)

While there is no technological precedent for concrete-domes in Métis culture, the Evans residence highlights an essential point – the historically progressive spirit of the Métis people. As will be explored throughout this research project, the Métis “way” has never been a simple style or an easily identifiable group of norms. Métis people have always taken pride in their distinct traditions (music, dance, art, language, lifestyle), however innovation and the adaptation to ‘other’ technologies and/or techniques has also been a strong contributor to their cultural ways.

It is thus not inconsistent that both tradition and innovation appear here, in built form, amongst community neighbours. Ultimately it suggests that, as in any culture, complexity and diversity must be recognized when it comes to discussions about traditional and progressive values.  As Collins notes regarding his elder colleague, “[her] beliefs and values may be a lot different than my beliefs and values…about the only thing that is universal is the sash.” 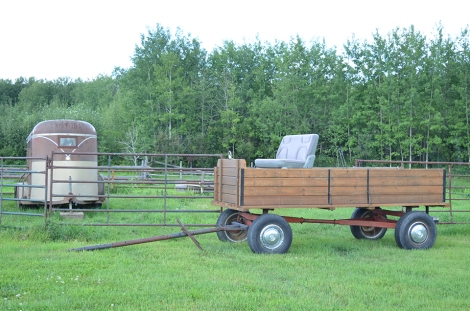