Though this research project is focused on Métis communities in the prairies, this merely scratches the surface of a national discussion about Métis design. Far away from the buffalo hunts, Saskatchewan folk homes, and Red River carts of the Great Plains Métis, mixed-culture communities similarly formed in places as far east as the coast of Labrador. Though culturally distinct from the Métis of the prairies for obvious reasons, their identities and experiences can be seen as consistent. The Labrador Métis are also known as the NunatuKavummiut people, who are part of the indigenous community of the southern Inuit who describe their territory as NunatuKavut, or “Our Ancient Land.” (1)

This was the environment that architect Harriet Burdett-Moulton was raised in. She was born in 1948 in Cartwright, Labrador, and raised in a nomadic family deeply tied to the seasonal hunting and fishing cycles of the region, living during summer months at Indian Tickle where they fished, spring and fall at Sandy Hill Bay, and winters at Sandy Hill River. The family moved back to Cartwright for winters in 1955.

Though identifying as Métis today, with mixed Inuit, Montagnais and European ancestry, this was not always the case.

Growing up in Labrador I was not aware of the word ‘Metis’. Everyone around me was similar and there was no distinction or discrimination. We thought of ourselves as regular people and if pressed to compare ourselves to outsiders we would have probably said we were ‘Half breeds’, half European and half Native. Even Native wasn’t a word we knew…When I moved from Labrador to go to university I realized how unique my life had been. I remember a group of girls from Labrador sitting in my residence room discussing the merits of never putting ‘Native’ on any university form because you’d be guaranteed lower marks. (2)

Formerly a school teacher in Povungituk, Arctic Québec, and in Halifax, following her studies at Memorial University, Burdett-Moulton returned to study architecture at the Technical University of Nova Scotia (now Dalhousie) from 1972-1976. In 1980 she moved with her husband to Iqaluit where she worked for the NWT government while starting her own firm. Following this, she moved back to Nova Scotia to work in Halifax and study International Development at St. Mary’s University before relocating to Nunavut in 2005 to work with FSC Architects and Engineers, which later merged with Stantec. 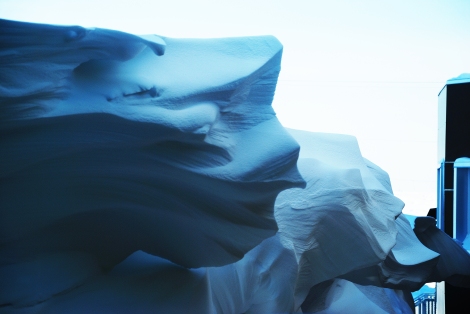 For Burdett-Moulton, her upbringing has greatly impacted her architectural career as she still feels drawn to the North – it is what she is ‘most familiar’ with. However, one of her first observations when she started working in Nunavut was that the local people were being ‘designed for’ and that they “had no participation or control over the building design or construction.” (3) In response to this, she worked with the NWT government in the 1980s to develop a program so that local Inuit would be hired on construction projects in their communities. She tells a story about the pilot project, a Nursing Station in Pangnirtung, where children removed the rigid insulation from the underside of the floor joists so they could make boats that floated on the ponds. However, the cost of shipping replacement panels was so exorbitant that the only option would be to wait for the next year. Instead, the community radio station made an announcement that influenced the local principal enough that he closed the school for the afternoon. Children were seen returning the sheets later that day.

Related to this kind of community involvement throughout the design and construction process, Burdett-Moulton explains,

Local labour and project participation saved the government money and gave residents pride of place that was reflected in the way they maintained and used the buildings. Nothing changes quickly or dramatically in the built environment but I feel that things can slowly and positively change as the people who use the building have a say in how they are designed and constructed. (4)

A significant aspect of community involvement, for Burdett-Moulton, is listening to the people, including elders, and students in the case of designing schools. For example, she worked for seven years on the relocation of Davis Inlet to Natuashish during the early 2000s, which she calls “an amazing and humbling experience.” (5) A complex project at many levels, Burdett-Moulton recalls how the council appointed two women from the community to shadow the project throughout the various stages. This helped the consultants to be “cognizant of the First Nations component” while facilitating the planning and design process. (6) It was this kind of ongoing community involvement that she felt most rewarding.

As project architect, I participated in all of their decisions and directed some of the discussions, but the people made their choices, and they were good choices. At the end of the Community Planning process, the Innu were pleased with their decisions and felt empowered. I felt I was able to in some small way give something back to my roots. (7)

As a specific example of community influence at Natuashish, the design team were inspired by the students’ informal use of metal corrugated quonsets in Davis Inlet. Their response was to add landscape features that would create snowdrifts for sliding.

Other projects that Burdett-Moulton has worked on include the reconstruction of St. Jude’s Cathedral in Iqaluit, the original having been designed by Ron Thom in the early 1970s and burnt down in 2005. Though the project involved working with a limited budget and two different factions of the client group (the Diocese of the Arctic in Yellowknife and the St. Jude’s Cathedral Congregation), as well as the structure supplier going bankrupt after construction had started, it was completed in 2013.

She was also the design architect for the Piqqusilirivvik Inuit Cultural Learning Facility in Clyde River, Nunavut, a project with only 7 other globally comparable programs according to their research (these were found in Greenland, Northern Europe and Spain). The vision of Piqqusilirivvik was to:

Provide a system that allows for the transfer of traditional culture, heritage, lifestyle and values taught in the traditional language and based on Inuit Qaujimajatuqangit guiding principles. This will occur on the land and in the physical setting that respects the natural environment while also providing the students with the modern amenities of today’s reality. Teaching and learning in a modern world of the past, present, and future is the key element of the vision. (8)

Once again, community involvement was central to the design of the facility, engaging in an integrated design process including “locals, architects, engineers, government delegates and representatives from Nunavut’s divisions of culture, language, elders and youth…[who] gathered for charrettes and workshops…” (9)

The result is a contemporary landmark in the community with strong cultural ties, that has been described in Canadian Architect as a “hybrid education-architecture initiative.” (10) Wood on the interior and earth tones on the exterior relate to the surrounding tundra while lichen-red flooring and sealskin covered built-ins similarly reference the northern landscape. The layout the building references a qaqqiq (large communal igloo) with various teaching and work areas opening onto the space for observational learning. (11) 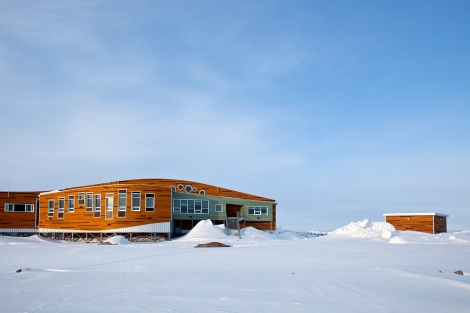 View of the village from Piqqusilirivvik. (Photo: Dave Brosha. Source)

Lastly, Burdett-Moulton was also lead designer of the Nunavut Trades Training Centre, a project that intentionally exposed the building systems for students (including substituting plexiglass for drywall in strategic locations while revealing all electrical and plumbing in other areas). Consistent with Burdett-Moulton’s documented observations of gender inequalities in large architectural firms in Canada (12), the project also had an underlying goal to encourage more females to enter the trades. Thus, there was a lounge for women designed into the building as well as tools, clothing and safety gear that were purchased from Asia to specifically fit “the smaller frame and grip of the females.” (13)

It is clear that Burnett-Moulton’s work emphasizes the essential interaction of the community in the planning, design, and construction stages, and also the ongoing use of the spaces throughout the life of the building. Her NunatuKavummiut upbringing has undoubtedly guided this approach and given her a unique capacity to negotiate the cultural complexities of working in the North. As she notes, “I have always felt a strong connection to these communities. There is a body language that is readable and comfortable to me when addressing Band Councils and community leaders.” (14) Similar to architects like Douglas Cardinal and Alfred Waugh, it is this level of comfort in both indigenous and non-indigenous worlds that relates closest to her Métis identity. As she explains,

I think that Métis culture embodies a fusion between First Nations and European world views. That’s what Métis means to me, the best mix of both worlds…This fusion of cultures can have a strong influence on design and if we foster it, it could be unique to Canada. (15)

Linked to Burdett-Moulton’s NunatuKavummiut roots, there has been some documented analysis by an archeological team (Matthew Beadoin, Richard Josephs, and Lisa Rankin) that similarly suggests that a hybrid Inuit-European sod house architecture developed along the coast of Labrador that was linked to gender relationships and close interactions with both groups. As they write,

The combination of persons from different cultural backgrounds, performing gender-segregated activities, produced a cultural hybrid that manifested itself in the Labrador Métis dwelling recorded at site FkBg-24. (16)

Thus, though there is only limited studies outside of the prairies that explore the notion of early hybrid architectures between indigenous and European groups in Canada, Beaudoin et al.’s research seemingly opens the door for this kind of discussion. The distinct features of these Canadian hybrids could certainly inspire a unique way to think about contemporary Métis architecture that is regionally specific and varied. While this clearly adds fuel to current debates about the use of the term “Métis” in such contexts, the value of a distinctly Canadian hybrid approach to design, one embodied in one of Canada’s most preeminent northern architects, Harriet Burdett-Moulton, is certainly worthy of much more critical attention.